SephardicGen
Resources
Who are the Sephardim?
A Brief History (cont.)
(Links for other sections of this website at bottom of page) 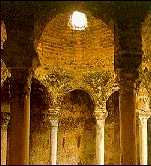 Jews and Christians in the Moslem World

Conversos, converts to Christianity, were a mixed bag. Many were voluntary and of true conviction and often these converts became the most zealous persecutors of the Jews. Many more converted, often as a gesture otherwise meaningless to them, because it was beneficial to their careers and position in court. Still others went to their deaths in the thousands condemned to burn at the stake for refusing conversion. Sad stories abound about families condemned to burn alive where mothers threw their children into the fire before jumping to follow them to avoid their conversion. Finally there were the forced conversions, the anusim. Being involuntary these converts clung to their Judaism in secret and became known as crypto Jews.

In 1391 C.E. vicious riots broke out in Seville, Valencia and other Spanish cities causing many Jewish deaths. Preachers such as Ferrer roamed the country stirring up mobs who looted and terrorized the Jews. A forced debate was held in 1431 between learned Jews and Jeronimo de la Santa Fe who 2 years after his conversion (as a Jew he was Joshua Harlorki) had risen to become the right hand of Pope Boniface XIII. The debate was designed to prove conclusively that Jesus was the Messiah and was declared to have done so.

The combination of debate, restrictive laws and persecution caused such demoralization of Spanish Jewry that thousands accepted baptism. The Jewish aristocracy was particularly encouraged to convert because they were needed to continue their traditional roles as counsellors to the government. Since the Jewish aristocracy was largely secular at the time, great numbers did accept baptism but maintained old traditions, such as not eating pork and similar. Many of them married extensively into the Spanish nobility where their wealth was a great asset to historic but empovrished nobility. Parodies appeared calling conversos alboracos because, Alborak the magic steed that transported Mohammad to Heaven was "neither a horse nor a mule", it resembled these conversos who were neither Jews nor Christians.

Though the clergy had felt that if Jews were converted to Catholicism their problems would be over, the over taxed, economically deprived Castillian peasantry, envious of Jews because of their economic and social success, noted no great change in their living conditions after the conversions. Gradually the anger with monarchs which had been deflected to their Jewish surrogates extended to the rulers themselves especially after a couple of particularly ineffective monarchs and a civil war between feuding half brothers.


[back to Top of Page Index]

The story of how Isabella maneuvered herself to become Queen of Castile and chose Ferdinand of Aragon to marry instead of the elderly King of Portugal is beyond the space available here but well worth looking up.

As Queen, Isabella took over a lawless Castile with a defiant nobility, widespread banditry, impoverished royal coffers and openly debautious clergy. Within 3-4 years she had turned things around and established order and central authority in all of these areas. Her marriage with Ferdinand (Machivelli's Prince) combined Aragon with Castile into the most powerful state in Europe.

Isabella was not initially antisemitic but she was devout and under the influence of her confessor, Torquemada, himself of converso origin, who taught her to hate heretic behavior. When she was convinced by Dominicans that many conversos retained Jewish behavior or beliefs she agreed to instituting the Inquisition in Seville in 1481 and then in other cities. It did not hurt that her coffers were empty and that the Conversos were among the wealthiest and most powerful group in the land. The planned war to conquer the last Moorish kingdom of Granada needed large funds that the Inquisition conveniently provided.

From a religious exercise the Inquisition rapidly became racial. Limpieza and untainted blood became the issue despite Ferdinand's own converso grandmother. The nobility, most of which had intermarried with conversos were terrorized and powerless against the power of the Inquisition and the Crown. Not much proof was needed to accuse someone of judaizing, and simultaneously proving one's own piety while settling old scores.

Many of the conversos were extremely prominent, wealthy, governors and intermarried with the highest nobility. They could not at first believe that these actions could affect people of their calibre but they were sadly mistaken. The Inquisition, backed by the monarchy was too powerful. Accusing hundreds of fellow conversos of judaizing was encouraged by the Inquisitors as a way to possibly save oneself from the flames, thus pitting one against the other.

The accused, sometimes for trivial reasons such as wearing clean clothes on Fridays, were taken during the night without warning and not seen again until their auto-da-fe. Under torture confessions came readily. Their property was confiscated, part going to support the Inquisition, part to the Queen and part to build churches and monasteries. Punishment could consist in being burned alive (to avoid the shedding of blood). Others had hands cut off before being burned or quartered. Mercy was shown to some by strangling them before being burnt. The lucky ones were deprived of all property, prohibited from government and other offices and ordered to wear the sanbenito for the rest of their lives. At their death their sanbenito was prominently displayed in the local church as perpetual reminders. Some can still be found in Spanish churches today.

Aware that many conversos did in fact practice Judaism in secret, rabbis and Jews were ordered to report Jewish activities of conversos or suffer death themselves. If conversos were heretics, Jews were the root cause of the heresy and needed to be removed so as to avoid contaminating good Catholics. The old blood libel of Jews murdering Christian children and using their blood for Passover was resurrected. Jews were demonized by quoting the gospel of John in which he stated Jews were the children of the devil while Christians were the children of God.

In 1490 a 19 year old Jew (Yuce Franco), his 80 yr old father (Ca) and some conversos were accused by the Inquisition of having murdered a Christian boy and used his heart for magical spells against Christianity. No crime date was given, no child was reported missing, no body ever found ("it went to heaven with his soul") and the confessions obtained under torture did not correlate. They were burnt alive in November 1491. The accusation of both Jews and conversos was not accidental and the case was publicized throughout Spain and used to build up momentum for expulsing the Jews.

Despite obvious fabrication, the story of the "Nino de La Guardia" continues to be taught as factual in high schools in Spain to this day, and it is found in the 70 volume Spanish Encyclopedia Espasa Calpe. It therefore remains a basis for fueling popular antisemitism in Spain. Details and names were subsequently added to the story over time and a church consecrated to the "nino santo".

In 1492 the expulsion edict was announced. Jews had 2 months to leave Spain or embrace Catholicism. No gold or jewels could be taken out of Spain. Catholics were forbidden to receive Jewish property which was therefore confiscated by the state. Thousands of Jews were hurriedly baptized. Others left for North Africa, France or Portugal. Columbus started his journey within 2 days of the expulsion deadline on ships manned largely by conversos. Jewish cemeteries in Spain were ploughed under and synagogues destroyed or converted to churches or pigsties. The edict of expulsion was not repealed until Dec 1968. The limpieza de sangre racial laws excluding descendants of conversos from jobs and academies remained in force, some into the XX century with many discovering their converso ancestry only when they were refused jobs after a mandated genealogy search.

In 1497 Portugal expelled its Jews too. Under the guise of the expulsion many were forcibly baptised en masse at Lisbon harbor to prevent their leaving the country. Spain's and Portugal's Inquisitions spread to their colonies where many of the conversos had fled to. The Inquisition continued for 350 years into the nineteenth century. It's last victim was a woman burnt at the stake in 1821 for allegedly having sex with the devil and producing eggs that prophecised the future. Crypto Jews continued for generations in South America, Mexico, New Mexico, etc. where some are found to this day.


[back to Top of Page Index]

As many visitors who have written to me have noticed, I have found it difficult to write this last section. The reason is that there is so much to write that I feel this part deserves much more space and time than I have available here.

The travails of Spanish Jews as they sought refuge wherever they could, their persistent identification for generations with the land they still considered home is a unique and fascinating story. Deprived of their possessions, often murdered on ships for whatever little they had left, their travels took them to nearby North Africa, Italy, the Ottoman empire whose sultan welcomed them ("if the Spanish soverain is foolish enough to expel his Jews, his loss will be our gain"), and the frontier edges of the New World in their attempt to flee the Inquisition which followed them wherever it could.

The impact of Sephardic Jews were very significant wherever they settled, both culturally and in economic development. Their participation in the travels of exploration, both Spanish and Portuguese, from Christopher Colombus who may well have been a crypto Jew himself to Francisco de Albuquerque and many others was profound and their acknowledged preeminence in map making and navigating - the reasons for which are themselves a fascinating story - made them the ship navigators on most ship travels of their time, usually as "new Christians". Those that settled in Muslim lands tended to share the cultural decline of the countries they resided in. Others mostly in Holland and the New World prospered and grew to new heights. The involvement of Sephardic Jews, mostly from Morocco, in the development of the Amazon and its rubber trade is another intriguing and little known chapter in the history of these Sephardim as is the impact of Sephardic Jews in the development of Holland as a world wide banking and sea-going world power.

One day I will find the time to try and do this vast story justice. In the meanwhile the interested reader is encouraged to read some of the books I have listed on the main Sephardic Genealogy page.

[back to Top of Page Index]